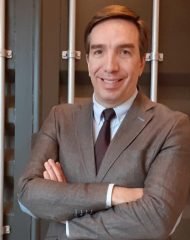 He has been a member of the Managing Board of the Spanish Maritime Law Association for seven years and it is a current active member of the Instituto Iberoamericano de Derecho Marítimo.

He works as a Maritime Law Professor at ALBA Business School of The American Business College of Greece, in Athens.

After working for the Legal Office of the Barcelona Port Authority, Miquel joined the container shipping line P&O Nedlloyd where he worked as an Account Manager. He was then retained by the United Nations in Vienna within the United Nations Commission on International Trade Law’s (UNCITRAL) Transportation Law Working Group, Maritime Law Branch, where he participated in the drafting of the Rotterdam Rules. Miquel also lectured in Maritime Law at the Webster University of Vienna.

Miquel was appointed Plenipotentiary of the Spanish Crown before the United Nations and, on behalf of the Kingdom of Spain, formed part of the Official Delegation that Signed the Rotterdam Rules.

Miquel then returned to private practice, first in Hamburg and then in Barcelona, after which he moved to London where he practised as a Solicitor acting for shipowners, shipyards, freight forwarders, logistics operators, P&I associations and insurance companies worldwide, both in court and arbitration proceedings.

His most recent work includes:

Miquel is the author of two books: “London Maritime Arbitration” (Thomson Reuters, 2nd Ed, 2021) and “The Ship Registry of the Estate of the Vatican City. Vatican Maritime Law” (CEU), which can be bought here.

Out of the office, Miquel is an active amateur swimmer. He has finished several master long ditance ocean races like Oceanman (10 kilometers) and Marnaton (7,5 kilometers). He is also a proud father of three and a double bass player and has a degree in Biblical Theology by the University of Navarra.

You can find out more about which cookies we are using or switch them off in settings.

This website uses cookies so that we can provide you with the best user experience possible. Cookie information is stored in your browser and performs functions such as recognising you when you return to our website and helping our team to understand which sections of the website you find most interesting and useful.

Strictly Necessary Cookie should be enabled at all times so that we can save your preferences for cookie settings.

If you disable this cookie, we will not be able to save your preferences. This means that every time you visit this website you will need to enable or disable cookies again.

This website uses Google Analytics to collect anonymous information such as the number of visitors to the site, and the most popular pages.

Please enable Strictly Necessary Cookies first so that we can save your preferences!